Teresa slow-cooked some beef brisket and made a red wine sauce to go with it. We served the meat with roast potatoes, Yorkshire Pudding, broccoli, parsnips, carrots and swede.

We found the wine smooth and velvety with blackberry and plum fruits and vanilla sweetness from 6 months aging in French oak barrels.  A very good match.

A couple of days later we had the remainder 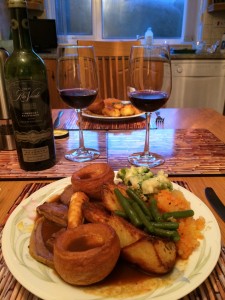 of the brisket with another Sunday Times Wine Club wine – The Hundred Cabernet Sauvignon Reserve 2011.

This full-bodied Australian red from Coonawarra had characteristic mintiness and was just as good with the beef.